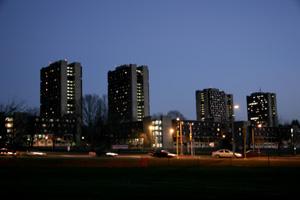 University of Massachusetts Amherst at Night

Perhaps pain is a catalyst for growth.  If that is so, going to UMASS made me a giant.

Washington, Adams, Coolidge, Kennedy.  Anyone who attended the University of Massachusetts at Amherst, commonly known as UMASS, recognizes these names as Presidents, yes, but also as the high-rise dorms in the Southwest residential section of campus.  Low rise dorms were also named after notable Americans:  Henry David Thoreau, Herman Melville and others, but the names of each dorm had dual meanings.  The UMASS residence hall system, like those in other universities, groups students according to class, race, career interests, and other demographic considerations.  Accordingly, each dorm had its own flavor and unique atmosphere.  Pierpont, with it’s beautifully rendered psychedelic murals was the Pioneer Valley’s drug haven.  Coolidge and Adams, the high rise women’s dorms, were relatively proper, clean and quiet.  Kennedy was 21 stories of chaotic, rabble rousing madness.

Then there was Washington dorm.  As a 17 year old from Washington, D.C., I enjoyed meeting people from New York and Boston.  The men in Washington were invariably stylish, confident and very attractive.  Two in particular, I will call them P and M, were each bright, handsome, charismatic and intriguing because they’d been friends before they arrived on campus.  In September 1978, they were a wonderful addition to the small Black community in the midst of UMASS’ 25,000 student body.

Racial tension existed in Amherst in the aftermath of the the Boston Public School desegregation riots.  Many students in that era had attended recently desegregated schools, and horrific stories about South Boston were heart breaking.  On the other hand, Amherst is a bucolic college town setting with picture-perfect scenery and a post 60’s peace and love atmosphere.  In theory, every student could learn and grow in a safe university setting without ever experiencing the harsh realities of the outside world.

30 years ago, one of my African-American classmates was attacked by a group and badly roughed up while we were gathering for a party.  The instant he walked in a massive group of men left with him to confront the attacker.  I will never know exactly what happened, but eye contact with a returning member told volumes about the sorrow of brutality.  We all tried to comfort one another and get through the evening.

In the morning, Jose was dead.

Jose was an African American of Puerto Rican descent, but had not been at the party, and he took no part in the attack or subsequent events of that horrible night.  On Sunday morning, my dear friend Ike Bradshaw found Jose leaning against the wall of his dorm room, apparently strangled.  No police investigation ensued, no forensic evidence was collected.  Nothing.  In late November, the University had to prepare for finals and UMASS’ month long wintersession.  A community meeting was held in which we were all advised to stay calm and avoid commenting on the events until further notice.

No grief counselling, no funeral, no justice.  We were a community under seige, and only our youth and resilience allowed us to manage the confusion and anger.  Really, the experience plunged me into what I now recognize as a dangerous depression.  I got away from campus, weathered the storm, and returned to finish  the remaining 3 years there.  But I never forgot Jose.

I will never forget Jose.